Led by Professor Chung-Chi Chen at the Department of Life Science, National Taiwan Normal University and Professor Chih-hao Hsieh at the Institute of Oceanography, National Taiwan University (IONTU), a marine biogeochemical research team has been co-sampling with a long-term observation project for the Kuroshio east of Taiwan led by Professor Sen Jan at IONTU since September 2012. During 2012－2014, six cruises have completed physical and biogeochemical joint samplings at 8 stations on a transect across of the Kuroshio east of Hualien (KTV1 section in the figure below). The observations reveal that the intensity of coastal uplift was positively correlated to the strength of the flow volume transport of Kuroshio. Sizable dissolved inorganic nutrients were heaved to the sunlit zone, particularly on the onshore side of the Kuroshio. For example, compared to the offshore, nitrate concentration increased 0.49 μM (or ∼178%) in the upper 100 m of the onshore. The increased nutrients subsequently enhanced the growth of phytoplankton; for example, the Chl-a concentration increased 88.3%, compared to offshore, in the upper 100 m of the onshore side. Phytoplankton community was mostly composed of picophytoplankton (<2 μm in size), which were dominated, in terms of relative abundance, by Prochlorococcus (83.6%), followed by Synechococcus (13.8%) and picoeukaryotes (2.7%). The relative abundance of Prochlorococcus increased from onshore toward offshore, but the trend was reversed for Synechococcus and picoeukaryotes, which may be affected by the coastal uplift. The results also suggest that the coastal uplift may support more energy transferred to higher trophic levels in this oligotrophic Kuroshio ecosystem. The paper is published in Frontiers in Marine Science (https://www.frontiersin.org/articles/10.3389/fmars.2022.796187/full)： 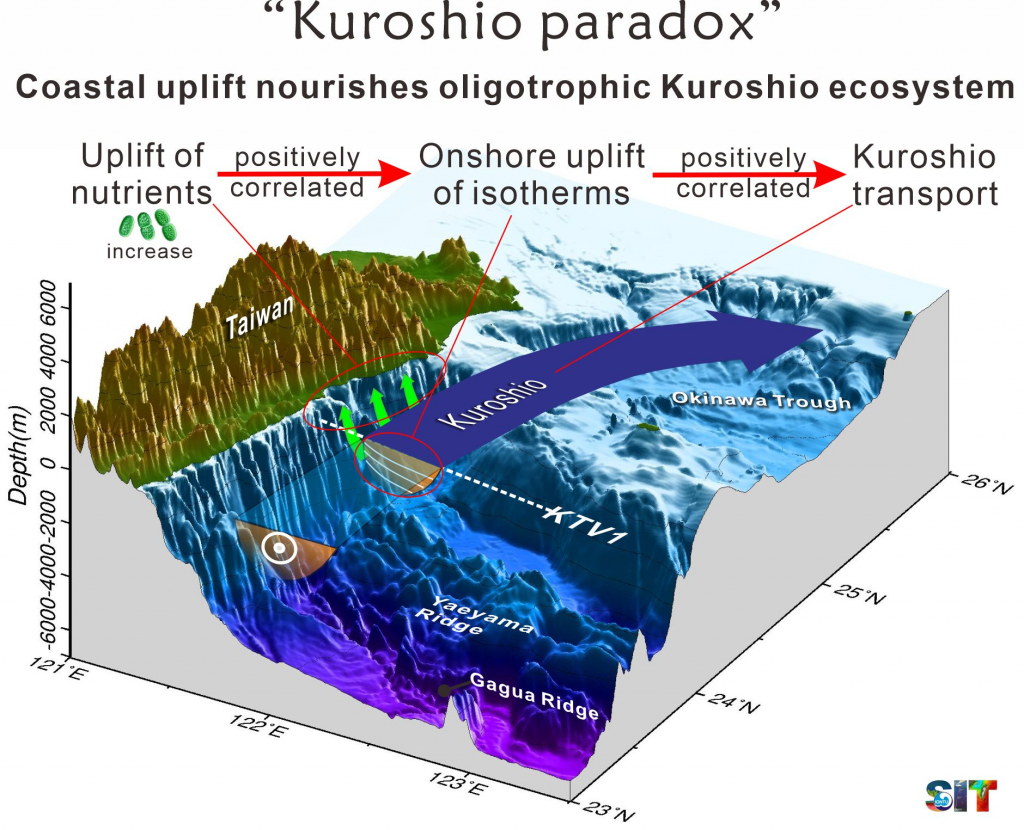