Between the spring and summer in the Southern Hemisphere, an intra-seasonal weather system: Madden-Julian Oscillation (MJO) propagates along the equator from west to east annually. The period is about 40 to 60 days, and the translation speed is about 5 m/s. Because of the general circulation of the atmosphere, the atmospheric condition is often stable before the passage of MJOs. This period is termed suppressed phase of MJOs. Therefore, the weather is often featured by the clear sky and low wind speed, which can benefit the formation of a diurnal warm layer (DWL) near the sea surface. The temperature gradient at the base of DWL can inhibit turbulent mixing. On the other hand, during the seasonal transition, the increasing insolation will gradually shoal surface mixed layer (ML) and warm upper ocean temperature. The shoaling of ML ~ 20 m often requires 10 days.

Hsu et al. (2022) recently discussed the combination of these two events based on the field observations. Several floats were deployed in the northwest shelf of Australia around the end of November 2018, which can measure upper ocean temperature and salinity. A MJO passed the floats around the middle of December. Though the atmosphere was featured by the clear sky since Nov 29th, the wind speed was still more than 6 m/s, which prevented the formation of a thick DWL. Since Dec 2nd, the wind speed was weakened to 2 m/s, so a thick DWL was formed. Meanwhile, the decreasing wind speed inhibited the evaporation and latent heat flux. It suppressed the nighttime cooling and convective mixing. Because of the thick DWL and weakened nighttime convective mixing, the subsurface layer could not be efficiently mixed. It prolonged the time for the layer to be restratified by the horizontal advection. Therefore, the ML was shoaled by 20 m in two days, associated with the increase of daily-mean SST by 1 °C. Because the SST during the suppressed phase of MJOs could significantly affect the heat and moisture in the atmospheric boundary layer, the rapid restratification of the ocean boundary layer was critical to the development of MJOs’ deep convection. This study successfully uses field observations to discuss the complicated evolution of upper ocean structure under a multi-scale weather system. 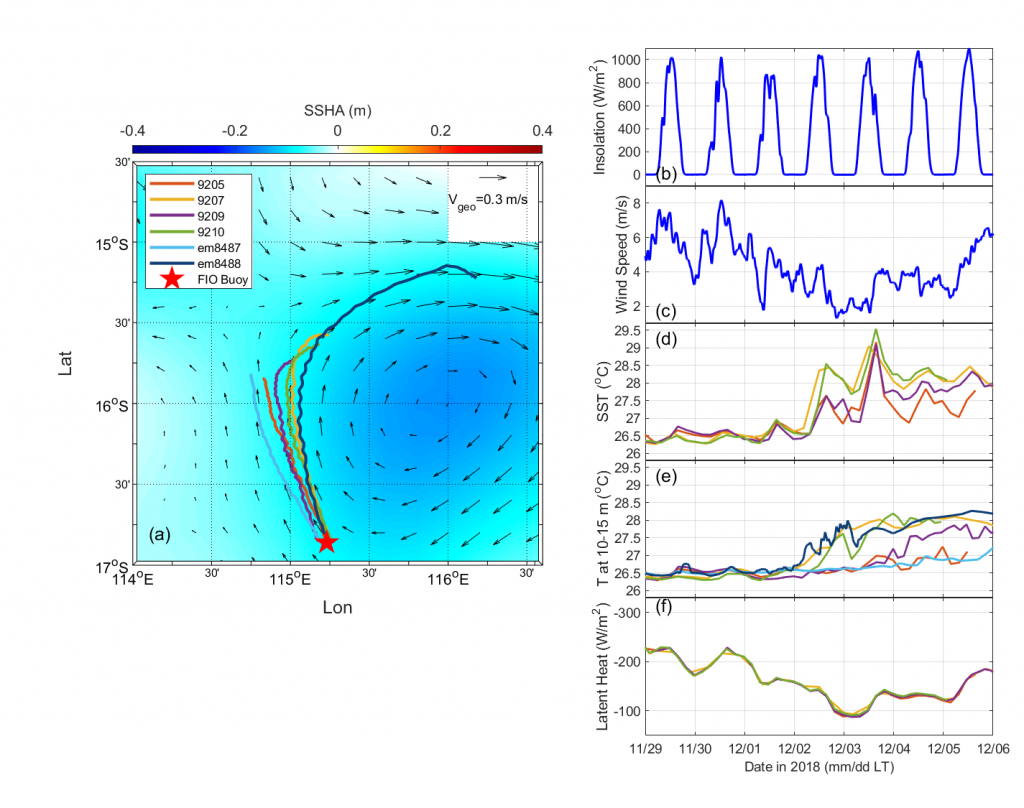