Tuna is one of the most popular fish species in the world. Taiwanese tuna longline fisheries operate in the three oceans, and it has played an important role in the world’s tuna industry. Fish growth, reproduction, death, distribution, and migration are integrated biological responses encompassing marine environmental conditions. We could expect that climate change may cause changes in tuna resources and fishing grounds. Therefore, understanding and predicting responses to global climate change are important issues for the scientific community to assist in designing effective fishery management to ensure the sustainability of the tuna stocks.

Albacore tuna (Thunnus alalunga), known also as the longfin tuna (Figure 1), is an important upper tropic-level oceanic predator distributed globally between approximately 50◦N and 45◦S, with relatively lower abundance in equatorial areas. Albacore is typically canned — often labelled “white tuna” in the United States. In recent years, albacore tuna sashimi and sushi have also become popular. One of the largest fisheries for albacore is in the South Pacific Ocean where annual harvest contributed about 60% of the catch in the Pacific. In the South Pacific Ocean, most of the albacore was catched by longline fisheries (>90%), the distant water longline fishing vessels from Taiwan, China, and the domestic longline fleets of various Pacific Island countries and territories (PICTs). 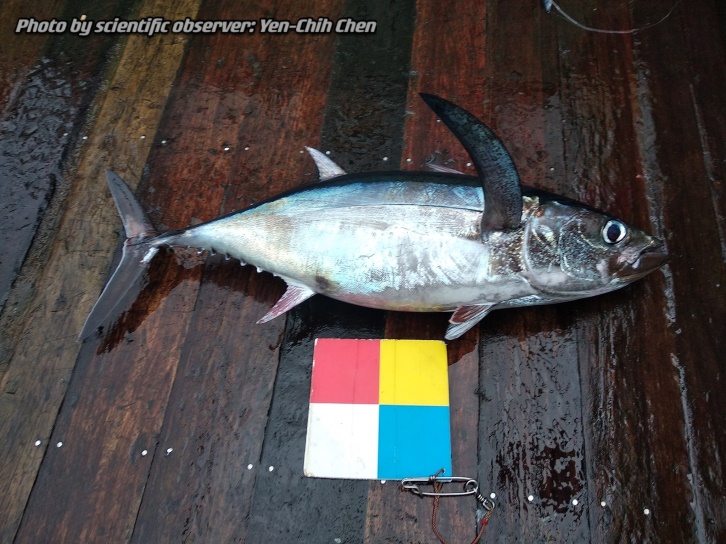 The authors examined the habitat preference and spatial distribution of south Pacific albacore using a generalized additive model fitted to the longline fisheries data from the Western and Central Pacific Fisheries Commission (WCPFC) and Inter-American Tropical Tuna Commission (IATTC). Future projections of albacore distributions (2020, 2050, and 2080) were predicted by using an ensemble modeling approach produced from various atmosphere-ocean general circulation models and anthropogenic emission scenarios (i.e., RCP 4.5 and RCP 8.5) to reduce the uncertainty in the projected changes.

In this study, the dissolved oxygen concentration at 100 meters (DO100) and sea surface temperature (SST) were found to have the most substantial effects on the potential albacore distribution that the albacore preferred in the habitat with DO100 of 0.2–0.25 mmol L-1 and SST of 13–22 °C. This study indicated that the northern boundary of albacore preferred habitat is expected to shift southward by about 5° latitudes, and the relative abundance is expected to gradually increase in the area south of 30 °S from 2020 to 2080 for both RCP scenarios, especially with a higher degree of change for the RCP 8.5 (Figures 2 and 3). 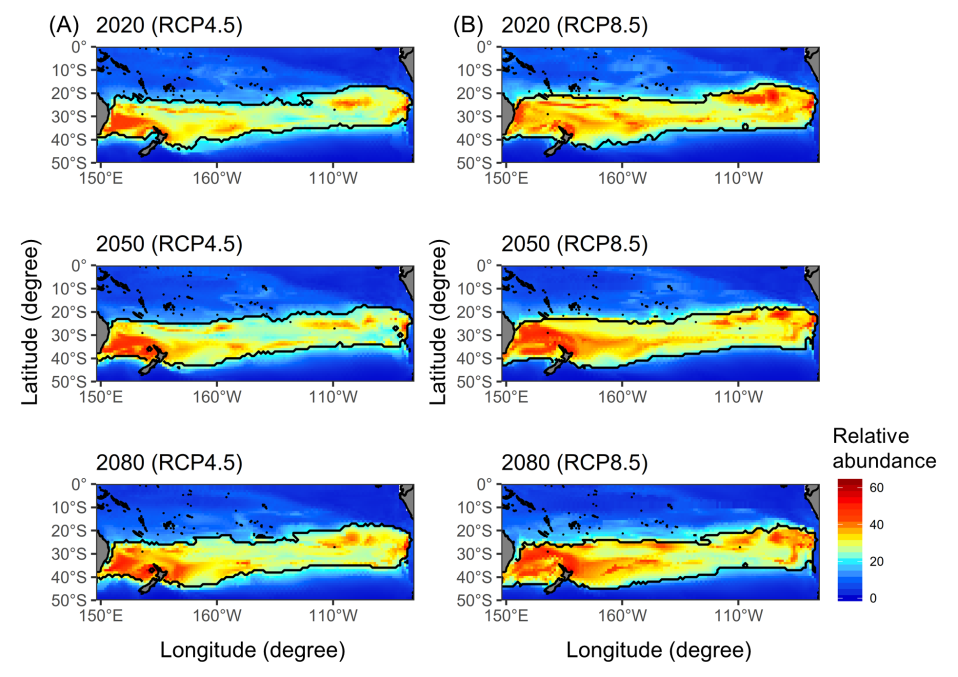 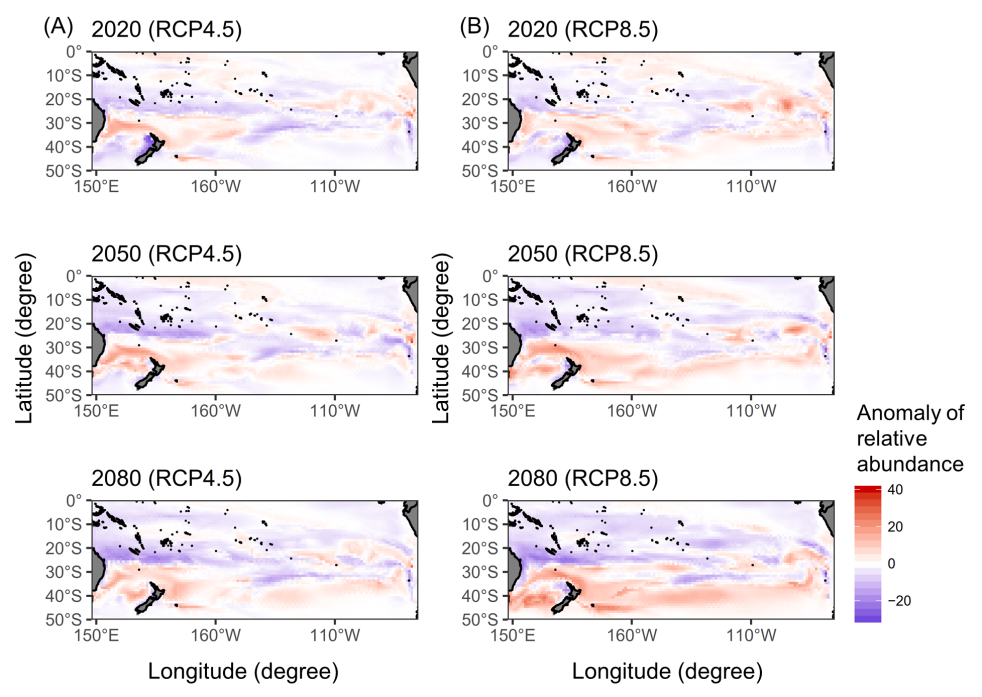 Figure 3. The spatial distributions of the anomaly of relative abundance for south Pacific albacore in quarter 3 calculated by subtracting the predictions of the median ensemble GAM projections in 2020, 2050, and 2080 from the recent average of 2012–2016 under the (A) RCP 4.5 and (B) RCP 8.5 scenarios.

Moreover, the albacore relative abundance is projected to decrease in the most exclusive economic zones (EEZs) of countries and territories in the South Pacific Ocean by 2080 (Figure 4).

Currently, the conservation management measure (CMM-2015-2) for south Pacific albacore by the WCPFC has forbidden any increase in fishing vessels south of 20◦S above 2005 levels (WCPFC, 2015). Under the current fishing effort constraint by the CMM, the future harvest catch of south Pacific albacore is expected to decrease because the potential albacore habitats are likely to increase in the latitudes of 30–40 °S but decreased in 20–30 °S of the western Pacific. This suggests that the effectiveness of CMM to achieve the fishery management goals could be impacted by the future potential distribution shifting. We assert not only the need but also the feasibility of incorporating approaches to address such shifts directly in the analysis of stocks and the management (e.g., management strategies evaluation) based thereon, so that the stock can be managed in a proactive and precautionary manner. 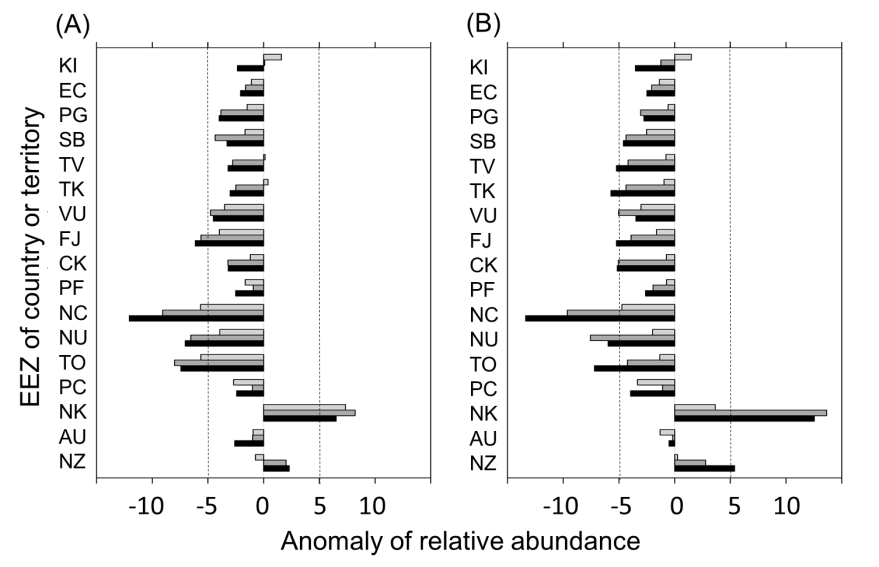