Profs. Chun-Mao Tseng and Jen-Chieh Shiao from the Institute of Oceanography, NTU, and the US cooperative colleagues worked together as the mercury research team (referred to Team Mercury (Hg) hereinafter). They initiated a new tool of the mercury accumulation rate (MAR) using top predators to examine global patterns in the cycling and pollution of Hg across the world’s oceans. It also confirms the unchanging truth of “You are what you eat, and You have what you are” since time began. The results of this study, published in September 2021 in the prestigious Proceedings of the National Academy of Sciences (PNAS), are expected to significantly improve the evolution and model validation of global ocean Hg pollution and lead new directions in marine fish-Hg-and-environmental pollution research. Also, it provides important information for fisheries management and seafood safeguard.

Team Hg used Bluefin Tuna, also abbreviated as BFT, as an environmental bio-indicator for this study. BFT is an apex predatory and long-lived pelagic fish, which migrates widely in the oceans and forages in different ranges of timing and locations. So, the source of Hg in the BFT can be inferred from the ocean basin where they live. Additionally, a considerable amount of methylmercury (MeHg), as a neurotoxic pollutant, was found in the BFT, in which concentrations increase with age. Based on these characteristics, Team Hg developed a standard basis of comparison to examine the tendencies of mercury pollution and trophic transfer. More precisely, it proposes to compare the MAR, defined as a change in muscle Hg concentration per unit change in age, among three tuna species from four different ocean sub-basins. The MAR in BFT as a global pollution index can reveal spatiotemporal patterns of Hg pollution and bioavailability in the world’s oceans.

Team Hg provided the world’s first-hand valuable Hg data with an exhaustive review of the literature to calculate the MARs in BFT in various ocean sub-basins and further to conduct trends’ comparison of Hg pollution. The results demonstrated that the MARs in BFT varied considerably, with the highest rates reported in the Mediterranean Sea, followed by the North Pacific Ocean, the Indian Ocean, and the North Atlantic Ocean in that order. Moreover, bioaccumulation rates across each basin increased proportionally with the concentrations of MeHg in the water column and planktonic organisms at the base of each basin’s food web. Their observations, therefore, indicate that the inter-basin variation in MARs among BFT populations is primarily controlled by the bioavailability of Hg in the waters in which they feed. Observed global patterns of MARs correspond to levels of MeHg in each ocean sub-basin which both closely linked to Hg inputs to each ocean basin from both natural and anthropogenic emissions and global ocean circulation. Overall, variations in Hg bioaccumulation among Bluefin Tuna and other marine fish with widely dispersed populations could be used to help study global Hg pollution, manage marine fisheries, and inform human health guidelines.

The study, which took five years of effort, was supported by the Ministry of Science and Technology, the concerted endeavor of students and assistants, and the assistance of outstanding international colleagues from Rutgers University and University of California-Santa Cruz (UCSC). It was finally recognized and accepted by the well-known PNAS journal. The article, entitled ” Bluefin Tuna Reveal Global Patterns of Mercury Pollution and Bioavailability in the World’s Oceans “, was published in PNAS, 2021, 118 (38) e2111205118; https://doi.org/10.1073/pnas.2111205118, and found on the website as https://www.pnas.org/content/118/38/e2111205118. It was further reported by several news and also highlighted by the news this week in PNAS https://www.pnas.org/content/118/38/eiti3821118. 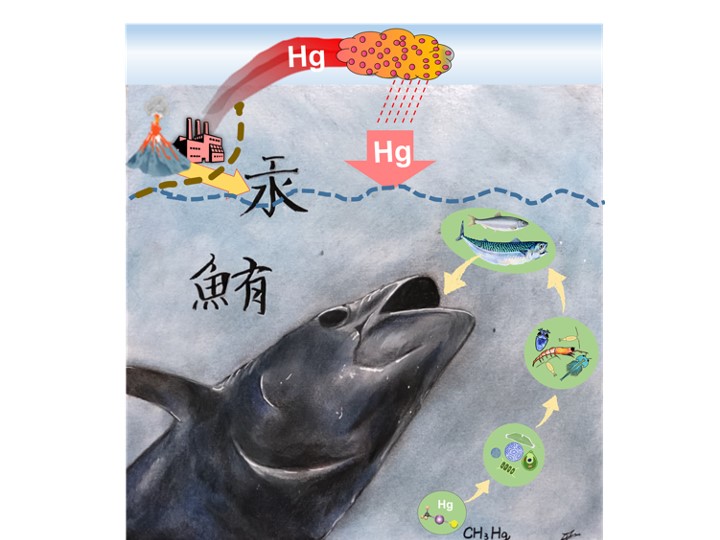 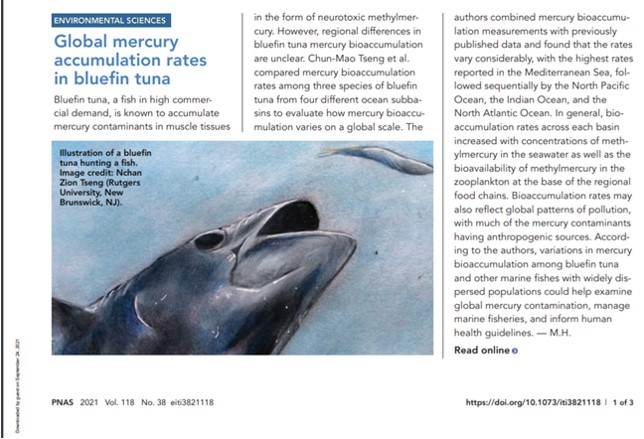