The South China Sea, which serves as an important maritime route between the Indian and Pacific Oceans, is characterized as a high biodiversity region in the world ocean, supports abundant fishery resources to the peripheral nations, and affects weather/climate in southeast Asia. A better understanding of its circulation is thus crucial for better prediction and sustainable management of the South China Sea. With this scientific concept in mind, Prof. Chung-Hsiung Sui at the Department of Atmospheric Sciences, NTU and Profs. Sen Jan, Yiing Jang Yang, and Ming-Huei Chang at the Institute of Oceanography, NTU jointly conducted shipborne atmospheric and moored 75 kHz acoustic Doppler current profiler observations in the South China Sea. The one-year current profile observations (from December 2016 to December 2017) (see Fig. 1 for mooring location and 40-120 m depth-averaged current velocities) and associated dynamic analysis using satellite wind and altimeter data as well as a numerical study advance our knowledge about the intraseasonal variability (one to three months) and the underlying driving mechanism for the upper layer ocean currents. The physical processes underlying the intraseasonal oscillations in the central-eastern South China Sea, particularly between May and November 2017, were hypothesized and a numerical model was used to examined the hypothesis. Based on the satellite remote-sensing observations and results from process-oriented numerical simulations, we conclude that, during the boreal summer, the strengthening (weakening) of the southwest monsoon led to the increase (decrease) of the onshore Ekman transport to the eastern boundary of the SCS, which resulted in coastal sea level rise (fall) off Palawan. Additionally, Rossby waves with relatively high sea level anomalies (>0.2 m) east of the Philippines may penetrate through a series of islands and the Sulu Sea to the west of Palawan and thus contribute to the coastal sea level rise. As the alongshore wind reduced, the resulting sea level rise off Palawan was relaxed to create Rossby waves propagating westward at speed ~0.24 m s–1 in the central SCS. These Rossby waves caused noticeable intraseasonal oscillations in the zonal velocity. The correlation between the other velocity intraseasonal variations and sea level variations in winter was not as clear as those in summer, and the associated dynamics warrants a future study. 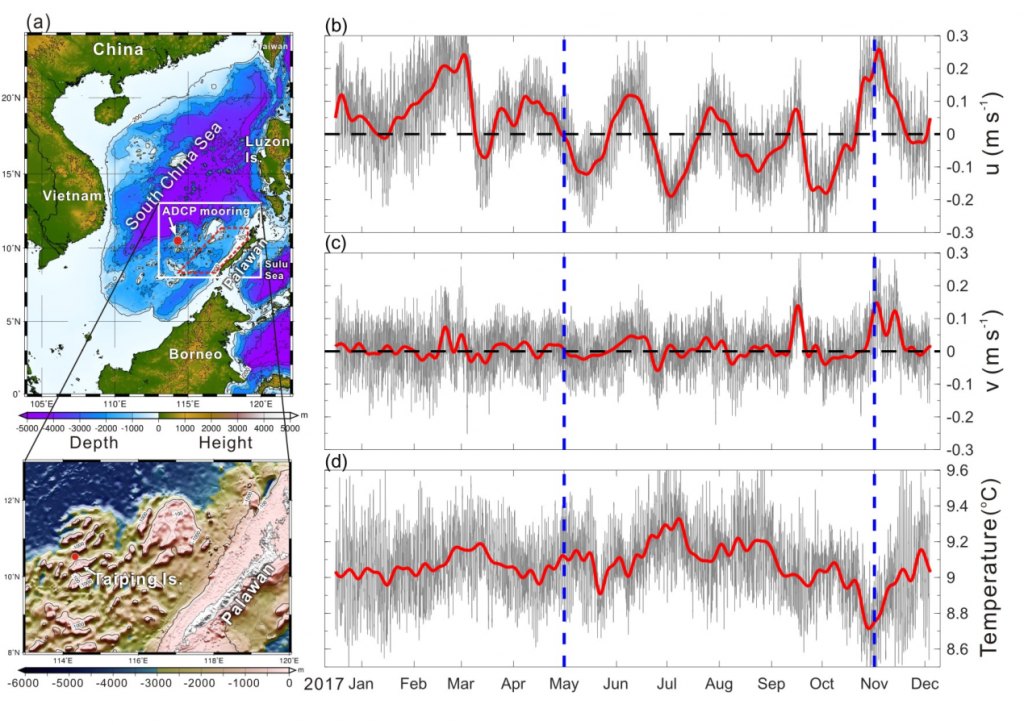 Fig. 1. (a) Bathymetric chart of the SCS and an enlarged bathymetry in the lower panel showing the topography around the mooring. The filled red circle in both panels indicates the mooring location. (b) and (c) Components of the depth-averaged (40–120 m) velocity (gray curves). (d) Raw temperature at 480 m (gray curve). The depth-averaged velocity and raw temperature data are low-pass filtered (red curves) with a cutoff period of 200 hr. The period bounded by the two blue dashed lines indicates the BSISO.