Postdoctoral researcher, Feng-Hsun Chang and Prof. Chih-hao Hsieh from the Institute of Oceanography, NTU, proposed a novel approach to examine how the predator and prey communities are assembled in order to understand how predator and prey diversity are often positively associated. This approach, using microbial communities collected from the East China Sea across years, is published in Frontiers in Marine Science (May 2021).

In order to quantify community assembly processes, the team accommodated a common assumption that species’ phylogeny can be used to represent their ecological niche (the niche conservatism hypothesis) and calculate species’ phylogenetic distances from microbial DNA sequences. In conjunction with null model approaches, community assembly processes for predator and prey communities were quantified.

In this study, the team collected samples from the southern East China Sea. The predators are heterotrophic nanoflagellates, and prey are bacterioplankton. The results indicate that predators imposed weaker homogenizing non-random processes on prey community, which in turn led to higher prey diversity. However, the effects of prey on predator’s community assembly processes were not found. These findings suggest that predators (i.e. top-down control mechanisms) could be the underlying explanation for the positive association between predator and prey diversities. This study offers a mechanistic explanation to the association between predator and prey communities. 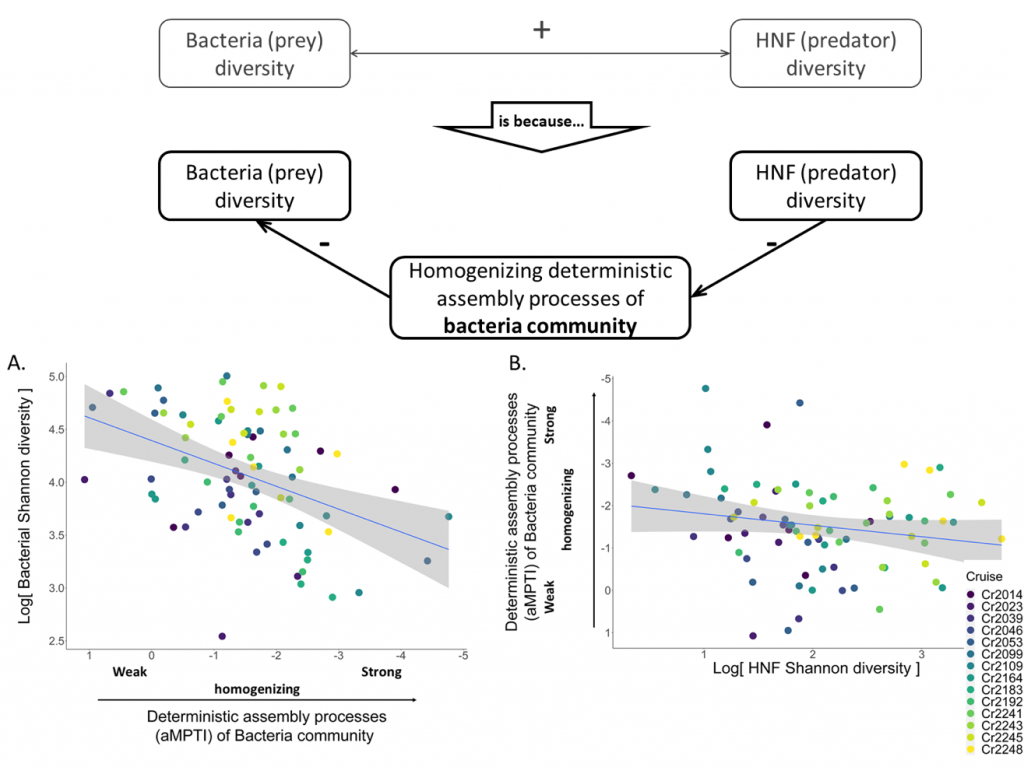 Figure 1. Schematic figure summarizing this study. The positive association between predator (HNF; heterotrophic nanoflagellates) and prey (bacteria) is found to be due to the fact that HNF diversity imposed weaker homogenizing non-random processes on prey community (panel B), which in turn leads to higher prey diversity (panel A). Blue solid line indicates the significant regression line fitted by the generalized linear mixed effect model, with cruise as the random effect. Gray shaded area represents the 95% confidence interval of the regression line. The colors of dots represent different sampling cruises.