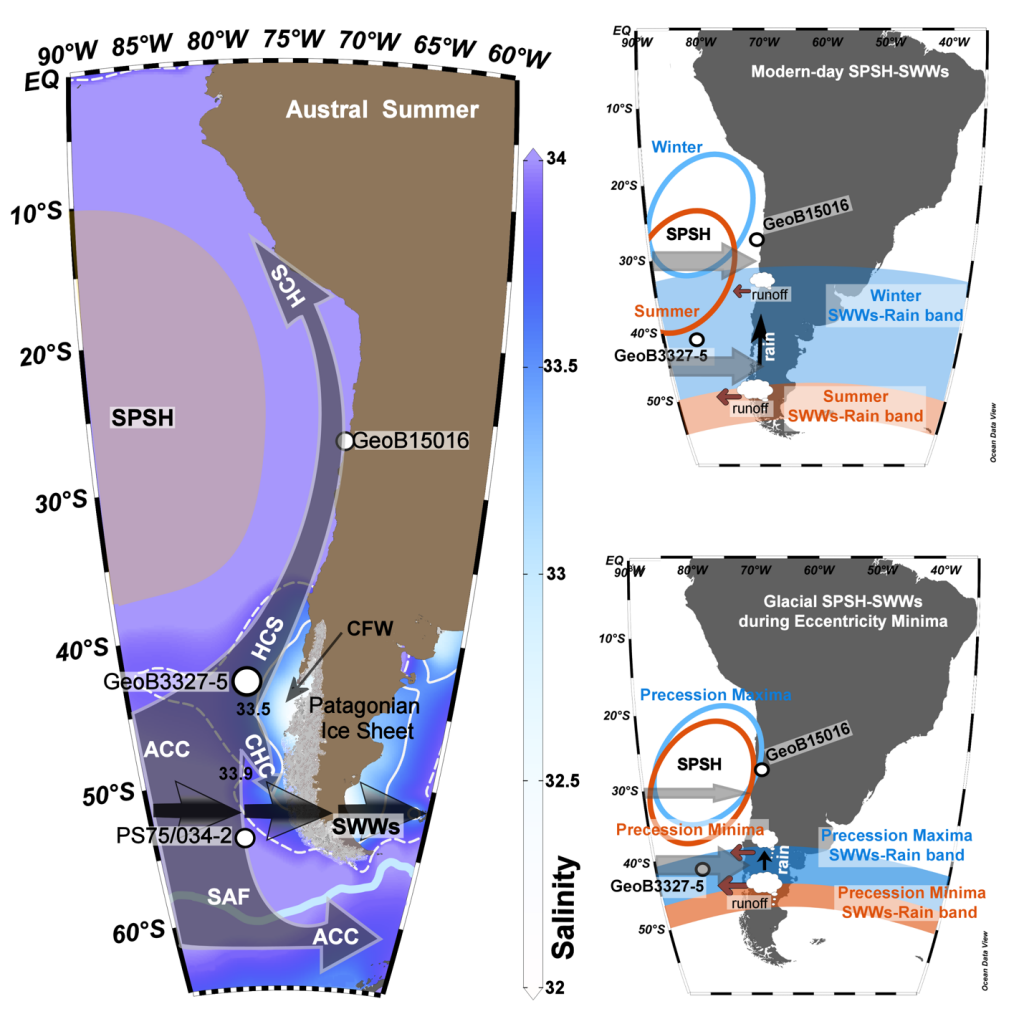 The Humboldt Current System is the world’s most productive eastern boundary upwelling system. It stretches along the long coast off Chile. Thanks to the abundant nutrients here, this region is characterized by high marine productivity, which forms the base of the food chain. It also gives rise to one of the most prolific fisheries in the world. However, marine productivity in the Humboldt Current System, hence also its impact on fisheries, may change with inter-annual climatic modes, such as the El-Niño Southern Oscillation. A better understanding of its link with climate change on longer time scale would be helpful for a better prediction of future marine ecosystem and fisheries. To tackle this issue, assistant professor Dr Sze Ling Ho and postdoctoral researcher Dr. Raul Tapia from IONTU teamed up with colleagues from Germany, Chile and Columbia. They analyzed a strategically located sediment core off Chilean coast retrieved on board of German research vessel Sonne. The sediment core is the first one in the southern Humboldt Current System that stretches back beyond the last glacial cycle. Here, nutrients for marine productivity are supplied from land and by nutrient-rich water from the Southern Ocean surrounding Antarctica. To reconstruct past changes in marine productivity, the team relies on the remains of phytoplankton and benthic organism that get preserved in marine sediments. They look at the abundance of an organic biomarker called alkenones produced by phytoplankton and the calcite shells of benthic organisms called foraminifera. The principle is simple – the higher the nutrients, the more phytoplankton will be produced. More phytoplankton means more food for benthic foraminifera living at the seafloor that relies on organic particles sinking from the photic zone, thus their abundance should also increase accordingly. Critically, organic remains of phytoplankton and calcite shells of benthic foraminifera are chemically different. Thus, when both show the same trends, it is highly likely that they reflect changes in productivity and not taphonomic processes. The multi-proxy data from this sediment core show that marine productivity in the Humboldt Current System increased during Marine Isotope Stage 2–4 and 10–11. The temporal pattern is different from that in the Pacific sector of the Southern Ocean, where the marine productivity increases during glacial stages due to an increased dust input. In contrast, in the pelagic Humboldt Current System, marine productivity is controlled by the nutrients supply from continental runoff, which is in turn driven by precipitation and glacial erosion. As the Earth continues to warm, it is possible that the disintegration of Patagonian ice fields and precipitation changes in response to global warming may play a role in influencing the productivity of Humboldt Current System and thus also the fishing industry off South America.