A study combining ecological stoichiometry and in situ zooplankton incubation experiments, led by Dr. Pei-Chi Ho and Prof. Chih-hao Hsieh in the IONTU, reveals that prey nutritional condition, especially carbon:nitrogen ratio (C:N), influences copepod production in subtropical marine systems. In contrast, primary production, although traditionally believed to determine zooplankton production, is found to have very weak influence. This is the first study that combines in situ measurements of primary and secondary production with stoichiometry in marine systems. This study is published in the journal Progress in Oceanography in July 2020.

To fulfill this knowledge gap, this research team conducted in situ incubations of copepod community to estimate the copepod production (CP) and measured PP and phytoplankton C:N and C:P ratios in the East China Sea and around the Dongsha Atoll in the South China Sea in 2009-2016. They found that CP decreases with high prey C:N and C:P ratio, and prey C:N ratio is the most important factor determining CP. Furthermore, CP is affected by taxonomic composition of copepods and phytoplankton. In contrast, PP is not the key factor explaining the variation of copepod community production. This research highlights the knowledge gained by simultaneously measuring phytoplankton and copepod production together with plankton elemental ratios for understanding stoichiometric effects on marine secondary production. These findings also cast doubt on the reliability of using primary production to infer fish production at regional scale. 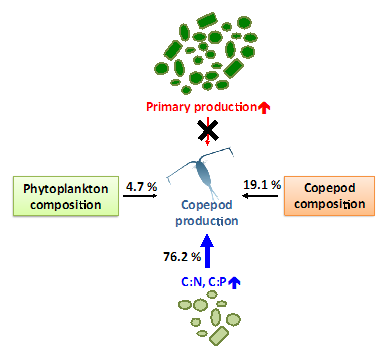