Mercury (Hg) is a neurotoxic element that features a complex biogeochemical cycling. In particular, the in-situ produced dissolved elemental mercury in surface seawater and its air-sea exchange with the gaseous elemental mercury in the atmosphere are an important part among Hg cycling. Air-sea exchange of Hg facilitates the re-distribution of Hg pollution and prolongs the residence time of Hg in environmental compartments. Hg enters the ocean primarily through atmospheric deposition, while in ocean margins, river runoff could be another considerable Hg source. Therefore, marginal seas are of great importance with respect to Hg cycling in the ocean. This research demonstrates the distinct spatiotemporal distribution of dissolved elemental mercury (DEM) in the East China Sea (ECS) from six seasonal cruises between 2003 and 2010. Our findings show the seasonal distributions of DEM were primarily governed by SST and solar radiation-related in-situ production rates; therefore, concentrations of DEM were significantly higher in the summer. In regard to spatial distribution which is influenced by the level of dissolved Hg substrates in varied water masses, DEM concentrations were higher in the near-shore Changjiang Diluted Water than in the Shelf-Mixing Water. The annual Hg evasion from the ECS is estimated to be 45 kmol yr-1, of which about 60% is contributed from evasion in the summer, the only season in which Hg evasion surpasses atmospheric Hg deposition. In a global perspective, annual Hg evasion flux from the ECS is about three times higher than that of global ocean average. In addition, according to the correlation between DEM and environmental parameters, rising SST and/or flood-related Changjiang discharge would increase Hg evasion flux from the ECS. This study has successively elucidated our knowing about the distribution and controlling factors of DEM in the ECS and highlighted the importance of marginal seas in global Hg cycling. 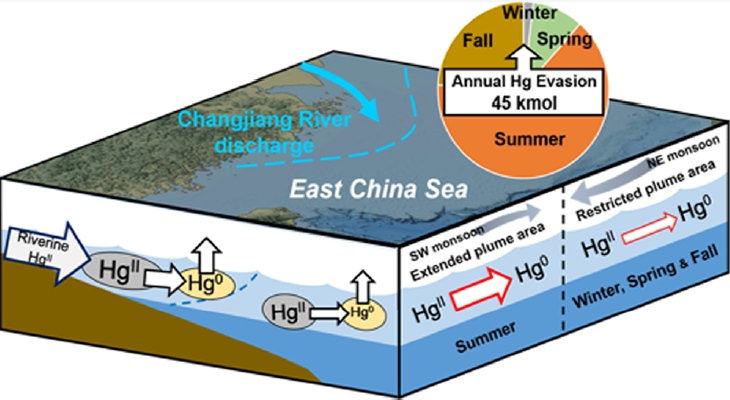