Enhancing the ENSO Predictability beyond the Spring Barrier

El Niño-Southern Oscillation (ENSO) is the dominant interseasonal–interannual variability in the tropical Pacific and it exerts significant influence on weather and climate all over the world. Because of its global influence on the atmosphere and oceans, ENSO directly affects worldwide human life and the terrestrial and marine ecosystems. Substantial efforts have been dedicated to developing different forecast approaches to predict ENSO evolution several seasons in advance. However, ENSO predictability has been reduced in the 21st century, and the impact of extratropical atmosphere on the tropics has intensified during the past 2 decades, making the ENSO more complicated and harder to predict. The team led by Prof. Yu-heng Tseng provides a novel approach to noticeably increase the ENSO prediction skill beyond the spring predictability barrier by combining tropical preconditions/ocean–atmosphere interaction with extratropical precursors (see the Figure below). The success of increasing the prediction skill results mainly from the longer lead-time of the extratropical–tropical ocean-to-atmosphere interaction process, especially for the first 2 decades of the 21st century. This ENSO forecast model has now been used in the IRI/CPC ENSO plume prediction (https://iri.columbia.edu/our-expertise/climate/forecasts/enso/current/). It is also included in the CMME ENSO forecast. Further information about the enhanced ENSO predictability and details can be found in Prof. Tseng’s recent paper published in Scientific Report (Chen et al., 2020). 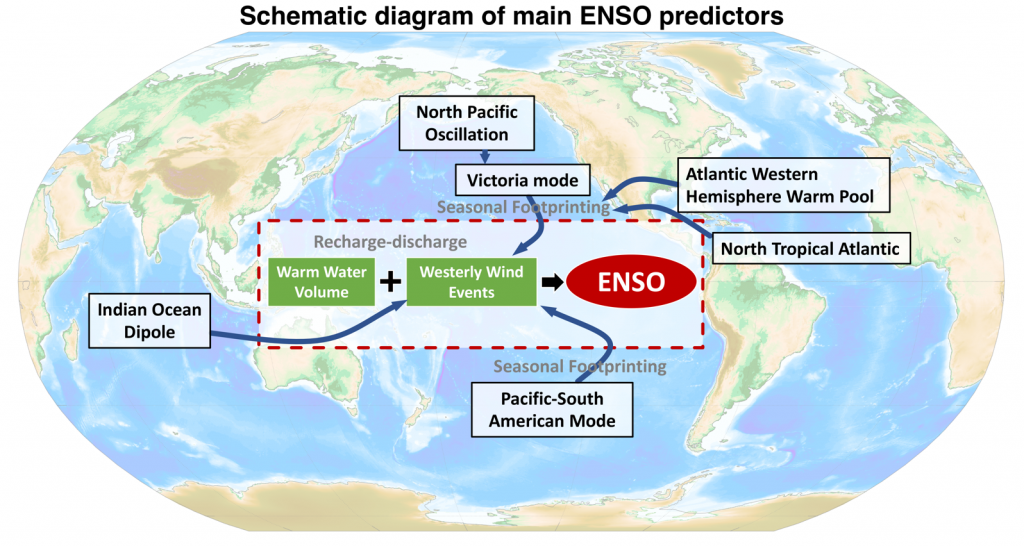