Two-years of data from an array of pressure-sensor equipped inverted echo sounders (PIESs) deployed across the Kuroshio east of Taiwan are analyzed in this study. Cross sections of temperature, absolute, barotropic and baroclinic velocities, as well as time series of volume transports and maximum velocity axis location are analyzed to better understand the response of the Kuroshio to local arrivals of mesoscale eddies and to upstream variations. A measure of Kuroshio position, Xvmax, defined by the velocity in the upper 500 m, does not always coincide with the position of the Kuroshio core defined by the velocity in the upper 150 m. These respond differently to single eddies, dipole eddies and upstream variations. Single mesoscale eddies affect the Kuroshio baroclinicity via a see-saw like vertical displacement of isopycnals from the surface to at least 1000 m depth. Single anticyclonic (cyclonic) eddies deepen (shoal) the isopycnals on the offshore side of the Xvmax, and shoal (deepen) the isopycnals on the inshore side. As a result of single anticyclonic (cyclonic) eddy-Kuroshio interactions, only the Xvmax shifts towards the east (west) while the Kuroshio core location is unchanged. Upstream variations of the Kuroshio in the Luzon Strait can weaken the Kuroshio and favor the eastward migration of both Xvmax and the Kuroshio core east of Taiwan. Coincident with this, a southward current is observed below 200 m depth off the coast of Taiwan. Dipole eddies were also observed to generate migrations of both the Kuroshio core and Xvmax.

See the article published in Journal of Oceanography online: 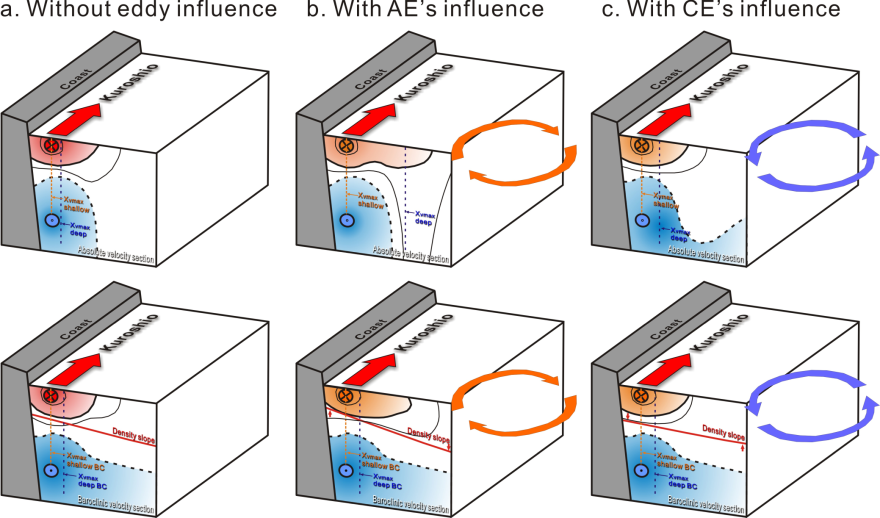